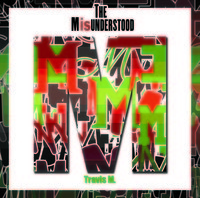 Travis M.’s “The MisUnderstood” is a blast from the past with a note in the present. After we get through the introduction we head into “Process.” It is a really laid back track. I thought from the intro that this one was going to be a ratchet record, instead this song came on and was well composed and straight laced. With the title track we get a fresh beat that has an old school, ’80s feel. With “BEAST” I thought we’d step up the energy a bit, and I was kind of right. The rhymes come a bit faster than we’ve gotten so far and it was a nice shake up. Travis M.’s pal Gina Smith hops on to help out on the anthem-like gem “Faith” while Serene gets in on the fun with “Gennesis.” As the record rolls on you can hear his influences that sound a bit New York in “Dream Land Gone Wrong.” He ends things with “Monsta with Xan.” This one really picks it up and comes across like a different artist. Travis M. gives us an old school feel in 2015 and it’s a reminder that some young emcees are still picking things up from the past and making them new again. If you like chill hip hop that can get hype when it’s necessary, check out Travis M. (https://soundcloud.com/TravisMjustM)