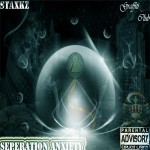 Staxkz’s “Separation Anxiety” mixtape is jam packed. “Educated Ignorance” starts the record off with a blast. Without seeing what this emcee looks like, you can hear a since of youth in his voice. Not in a way that he is all about fun, but just he has a young sound like he’s in the same game as Tyga and Drake. The title track starts off a little funky, but in a good way. It kind of just sits in the middle, but “I Know” gives off an energy that’s electric. In a way that Drake would kickstart a track, Staxkz plays on a laid back club feel to get this party started. This one has radio written all over it. He’d be smart to take this one to the masses. The same can be said of “The Long Way” and “Gone Ham” featuring his boy B Lanes. As the record progresses, you hear highs and lows from Staxkz and get into some aggression here and there, like with “Who With Me.” “Separation Anxiety” is a versatile hip hop record that should be on your “must listen” list at the top. So note that and check out Staxkz now. (https://www.datpiff.com/StaXkZ-Seperation-Anxiety-mixtape.450855.html)