B.u.D. Brings Reality to the Burbs 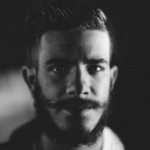 B.u.D. comes from the mean streets of Santa Clarita. No, that is a beautiful area north of LA that is void of graffiti, but this emcee is bringing a sense of reality to the place that looks like a scene out of “Leave it to Beaver” with his rhymes. “Stranger In My Hood” starts off in a way that one would think this ambient rock song was going to start – something on the lines of Muse. Instead that theatrical intro continues as the backdrop to a clear cut hip hop track. Now that we know what is expected, “Hypocrite (Waves)” comes through with some ease. This time the delivery it taken down a notch. While in “Bottles” the beat strays away from that drama and is like club music, but the lyrics are laid back. The imagery set with just the first seconds of “Rainy Streets” cools the mind and puts you at ease. Last up, “Ocean Floor Kisses” continues to create this elegant imagery, and the music is easygoing while B.u.D. comes across with a bit of urgency in his words. If you’re a fan of artists like Mac Miller and Tyga, check out B.u.D. now. (https://soundcloud.com/b_u_d23)