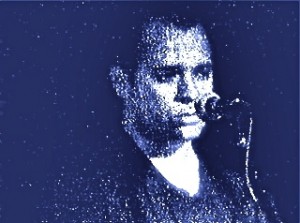 “The Radio Hour,” is essentially Chicago artist Tim Hort. He has been performing live either to Chair and event he has organized as a fundraiser for local and international benefit, or he performs at venues with proceeds to a designated charity or community service, which is announced at eash show. Hort’s extremely personal material brings its own brand to the term “loneliness” while using pop hooks to keep your attention riveted on the melancolic lyrics. The line-up includes not only Tim Hort on vocals and guitar, but additional performances by guitarists Joe Griffin and Jordan Maracus, with Natan Britsch on bass, Sean Burke on drums, also Andy Swindler and Yeater on B3.

The album “Radio Power” is recorded and mixed by Blaise Barton and Brian Leach, both of which are seasoned producers. The album begins with a track called “Tuesday” and it’s one of the better songs, with its bouncy drum track setting the pace. The atmoshpere is vibrant and full of imagination. They do well at the under 3 minute pop tune factor. In-fact they go the distance and prove that it can be reinvented. This isn’t a guitar driven track, the vocals and percussion do most of the work, and Hort shines on vox while at it. This is followed by the theatrical approach of “Heartbreaks And Slamming Doors,” which Hort opens up wide with a storytelling feel that doesn’t disturb the pop elements, almost harking back to the 20s at times, with a very classic touch. “Rollercoaster” seems to be about choosing sides without going off the tracks. I find it appealing but at the same time verging on boring, even though it’s a well written and recorded song. It’s the only turn off for me. “Look For You” is another story, this is an epic number that brings it all around. It tops the reast by an edge but there are a lot of tracks to absorb as well, such as “Friday Night” and “The Killing Stone,” and “Apart From These Tragic Stories,” all which intrigue to say the least. Another song worth mentioning is the highly recommended “World In A Day” which keeps the imagination burning with a chilling vocal performance by Hort.

These tracks are all artistically magnificent, as well as the instrumental backing, and the result is a release to reckon with. Some of it goes extremely deep and downright depressing, but it’s balanced with an upbeat vibe that holds it all together.