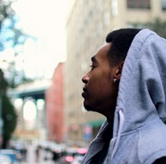 With Darryl Sir’rah by his side, we’re starting this off with “The Life.” It’s clear with the hook that this is a California artist but Zay P himself and his way with words, he could be an east coast rapper from The Bronx. Again with Sir’rah, we hear a more Lupe Fiasco like style from this young emcee in “Made For This.” He’s more composed here than in the last and listeners can hear the man behind the words loud and clear, even though this is a chilled take on hip hop. From laid back to the club, “Keep It True” isn’t a song that would get things turnt up but it would get girls and guys moving to the back beat. In “With Me” it doesn’t flow as well in the vocal department as the rest when it starts, but it seemed like a hiccup as the rest of the track is solid. If you’re a fan of artists like Lupe, check out California’s own Zay P today. (https://soundcloud.com/zaytrigga)