S$treetz (On Da Beatz) Shows A Lot of Heart 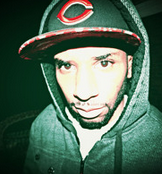 Out in the Midwest S$treetz (On Da Beatz) is doing his best with his rhymes. “Wave 2 Me” featuring Kabrina is where we start off and it’s on this slow ride that this journey gets going. The lead in is long and sounds like you’re floating down a hall of smoke, like in a dream. Things don’t pick up when S$treetz comes in but his vocals are crisp and intertwined with the effects, this is one stellar track. “Once We Leave the Bar” could go in a number of directions but the one we traveled is a hype track that makes you move in an instant. It’s definitely a hook up anthem. From hooking up to breaking up, “Words from a Broken Heart” really flips the script from the last. It’s clear he’s lost a love, but he’s not taking the woe-is-me route, but instead staying strong in this track that intertwines spoken word with hip hop well. With “I Care About You” we’re welcomed by a faint vocal performance that grows in strength as the track plays on. When S$treetz (On Da Beatz) comes in, he really tells a tale you’d want to hear on repeat. If you’re a fan of hip hop that has heart, check out Ohio’s S$treetz (On Da Beatz) now. (https://soundcloud.com/StrzBtz).