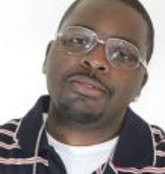 Detroit’s known for a lot of things, but soon it’ll be known as the home of Al Luv. “Determined” gets the point across with repetition. If you want a song that’s easy to learn, this is it. Once all the determination sets in, things get more sing-song and the hip hop takes a break with the chorus. Moving on, “Get It Ready” takes the idea of the chorus of the last one and creates a whole song that’s in that style. It’s more mainstream hip hop in that it has a beat that’s more pop-like than street. We go more towards the street though with “G.M.S.” It has a harder feel than we’ve heard so far. It sounds like a song that would be a great listen on a summer day, outside on the porch. “From the Hood to the Hills” lets us continue on this path of harder sounds from Al. This one stands tall as it has a sense of reality in it lyrics. Going into “Dats Me!” we have a track that would get booties shaking on the floor with the hook alone. To close this one out, we’ll end with “Gotta Keep It Movin.’” It’s a great one to end our time with Al Luv because it’s not only a great track that sends positivity through you, but is also a reminder to keep on keeping on. With that, if you’re a fan of hip hop that can be both chill and street, check out Al Luv today. (https://soundcloud.com/al-luvv)