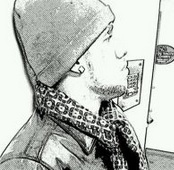 Coming straight at you from the big PA, I$O Jyn sounds as New York as they can be. “Lyrical Manslaughter” has this very New York, Jay Z – big sound. It sounds like the video would feature the bright lights of the Big Apple. You can envision that in an instant. Plus, the rhymes flow so naturally, you can’t help but dig in and enjoy. We really started on a high point so heading on from here we’ll see if we can hit that peak position again. “LU BU” comes stronger than the last with rapid lyrics but it’s not the grand finale like the latter. “HopOff” comes across as pure intimidation. With “Suave So Kleen” it sounds like something out of a movie at first. The setup has a lot of drama. Then when things get started it doesn’t pop off like one would expect, but stays subtle. When you boils things down where were started is where the star of I$O Jyn’s tracks sits. It’s rare to hear a song like that from a indie emcee but it’s up there with the big dogs in terms of production, lyrics and overall presentation. If you want a master of his craft, check out I$O Jyn now. (https://soundcloud.com/isojyn)