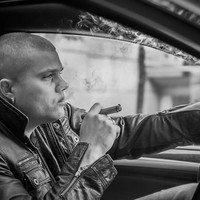 Who knew Canadians could sound this some straight up West Coast swag? Poppy Seed, that’s who. “Westcoast Hustler” follows a real cool flow, with an intro that almost sounds like the intro to a daytime court show and a pace that’s reminiscent of Nate Dogg. “Send Me To My Grave” is vastly different in that it incorporates old soul as he lays out a playing field that’s all about shouting out other artists. It actually gives off this almost country feel – which is interesting for hip hop. Speaking of country, “Johnny Cash” isn’t what I expected at all. I thought it be this rebellious ditty, instead it was almost sensual with just the mention of being in all black like Cash. Do you remember Everlast? Well that’s what the vocals in “Micky vs Mallory” sound like, as Kristen Biegel helps out on “Castle In The Sand” and gives a superb performance. Things finally pick up with the Flo Rida like “One Night.” The one thing to take away from Poppy Seed is that he’s precise and well done. He doesn’t make music that makes you question why he does what he does, for it’s done so well – you know exactly why he’s in the rap game. Check Poppy Seed out for yourself and agree or agree even more. (https://therealpoppyseed.com/)