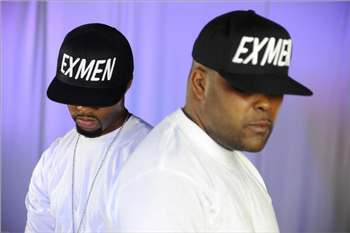 New York City – you know it as one of the hip hop capitals of the United States. EXMEN is the next group to join the proud tradition, featuring longtime duo E.X. and Menace. If you’re thinking Nas, Wu-Tang and Biggie, you’re on the right track, as this pair is delivering their new singles “Where We Come From” and “We Rise” with an ultra-smooth flow that leaves you screaming for more.

Originally formed in 1996, these aren’t the up and comers or rookies you’ve been running into on the internet – this is real deal heavy NYC hip hop. With lyrics chock-full of inspiration from their upbringing in the Douglass Projects and the seedier streets of the city that the mainstream wouldn’t dare to visit, EXMEN pack a serious rap punch wrapped up in a clean, tight package. Now working with Strictly #1 Entertainment and fresh off music video releases for “Where We Come From” and “We Rise,” they’re planning to release a new EP in Spring 2014.