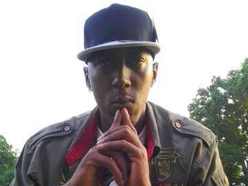 Malichi is a rapper from Indiana who knows how to make guys move and girls swoon…most of the time. “She” is about leaving a girl? That’s what is sounds like, so could we chalk this up to one of the best sounding breakup songs? Yes, yes we can. It’s rap but flows like an R&B song. That same style can also be heard in “Beat It Beat It.” It’s another song about a girl, but this one likely came before “She” since it’s not about leaving the girl. Malichi takes a break from the girl tales to “Flip Da Swagg.” This is one of those songs that has a poppy hook that invites you in, but it’s the rhymes that make you stay. “Push” reminds me of an R. Kelly song and that’s definitely a good thing with the R&B allowing for a smooth delivery. We stop taking things nice and slow just a bit when “My Pretty” rolls around, the soulful ways are still there but the rhymes are spit our fast. Malichi makes things pop hard with “Wish U Was Me” thanks to its unique beat and catchy aroma. If you’re shopping around for some new hip hop that crosses the line into a genre that’s fitted for R&B fans as well, then check out Malichi. (https://www.reverbnation.com/malichi4)