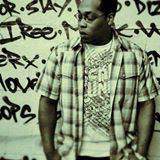 Growing up in New Jersey, Dwight “Lyriqs” Giles sought out music at an early age. At fifteen he was a DJ and heavily influenced by his father’s record collection. You can hear the flawless blend of new and old him Lyriqs’ music today. Now in Baltimore, Maryland he is doing all he can to shed a positive light on a genre that’s usually overrun with ideas that you will likely never hear in Lyriqs lyrics. He has this hip hop, neosoul sound going on. Somewhere between Outkast and Common sits Lyriq and his songs that resonate with an audience that likes to explore the world with music. Songs like “A Poets State of Mind” has something to say with beautiful piano intro, as does “Mirror” featuring Kay which tells women they don’t have to take their clothes off. You’d never hear that sentiment in a Lil’ Wayne track. The positivity flows on with “Suga” as it states beauty is relative. Going back to Lyriq and his dad’s musical influence, there is no better example of that than “Not Going Down.” It has this big bang intro and then goes into a hip hop beat, but continues to have a jazz layer with the brass in the background. If you’re into hip hop that delivers a message, check out Lyriqs’ music. (https://www.facebook.com/LyriqsOfficialPage)