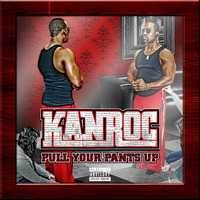 Kanroc comes with a force attached to him. His rhymes are intimidating, and we can only imagine his presence is just as so. With only two songs Kanroc can strike fear and respect in you at the same time. “Rough Road Back” commands attention with a monologue that leads to verses and choruses that are in the same family as what we used to hear from the likes of Ja Rule and DMX. There was even some bark in Kanroc’s bite at certain points. “Pull Your Pants Up” was an interesting take on the current state of Black America, not one you often hear in hip hop – at least from this perspective. Kanroc points out the idea that education is often looked down upon, if you’re smart it’s like you’re showing off. He laments that by stating, “…mad because I’m intelligent.” The idea of pulling up one’s pants and getting educated is a good message to send to young people who listen to hip hop. Being book smart and dressing the part isn’t something to be viewed as negative. Kanroc, while intimidating, uses his power for good. (https://www.jango.com/music/Kanroc?l=0)