Jupiter in Velvet – The World Didn’t Start With U 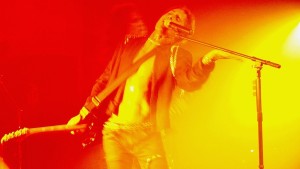 Jupiter in Velvet – The World Didn’t Start With U

No clichés. It’s too easy to say that youth will have its way and point to Jupiter in Velvet as yet another swaggering young artist empowered by his temporary alliance with time to make great music. After a thorough listen to his album The World Didn’t Start With U, it’s difficult to imagine him flaming out five minutes after his thirtieth or fortieth birthday. This is songwriting with legs and boundless flexibility to change with an artist’s ever-evolving vision. The twelve tracks comprising The World Didn’t Start With U are kinetic, irrepressible testimony to the enduring power of great guitar players and melody. More than that, however, the songs ripple and churn with vital energies that transcend the current. The World Didn’t Start With U is aiming high.

The title track reflects that ambition. Nominally a straight-forward rocker, there’s much more going on here than meets the eye. It’s a head-on collision between blistering hard rock and the melodic sweep of the grandest pop. There’s crackling electricity spilling off the track that threatens to singe the speakers. “Alpha Me Omega U” is a clever bit of songcraft eschewing the fire and fury of the opener in favor of a bass-heavy groove that immediately bends the ear. It has added grit that gives it an extra level of suggestiveness without ever pandering to the listener. “The Beauty of U” has a distinctly different era thanks to the free-floating guitar lines that, ultimately, create a larger whole than their seemingly wayward thrust initially implies. The deep melodic gifts in evidence throughout the album are particularly strong here and strike a sharp and compelling contrast with the album’s visceral, high-octane sound.

The World Didn’t Start With U hits another high point with the impressive fusion of rock and pop orchestration of “When Love Rules the Day”. The exemplary drumming keeps pushing the tempo envelope from the song’s opening bars, but the rhythm section serves the higher goal of providing a platform for one of Velvet’s best guitar and vocal performances on the album. “No Matter Where U Go” stuns with an impressive turn into acoustic balladry. It might sound out of place to some, but there’s clearly a bravery here that defines a true artist. “Camden Shuffle” lives up to its billing with its pounding sway and powerful grooves. The drumming once again stands out as a fulcrum on which the song’s musical pyrotechnics find their footing.

Footing is in short supply on “Eat Your Fear”. This is a musical excursion into outright danger as the brash guitars swell to enormous size and pummel the listener with round after round of heavy riffing. The album finishes with “Drive You In2 My Sea”, a lush pop focused affair with strong harmonies and rich melodic content. It’s an appropriate closer for an album full of sound and fury. The World Didn’t Start With U pulses with deep musical skill and love of the art.