Jeremy Porter and the Tucos – Above the Sweet Tea Line 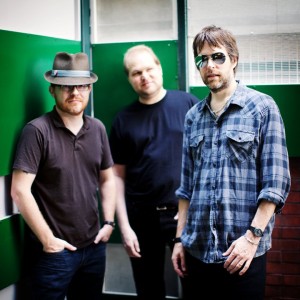 Jeremy Porter and the Tucos – Above the Sweet Tea Line

As an album, it’s hard to gauge just exactly what kind of record Above the Sweet Tea Line is. Jeremy Porter and the Tucos don’t allow for easy interpretation and mix up their tunes quite frequently, maintaining a heavy emphasis on rock while allowing many other flavors to seep into and steep their specialized potion into something bewitching and alternative.

At its core, Above the Sweet Tea Line is a rock album that makes no excuses about what it is. “Josh” is a tossing and turning opener built on sturdy guitar lines, melodic vocals with a gruff excess to ‘em, beefed up rhythms and occasional forays into lead fireworks where Porter lets rip with soul and sass. He saves plenty of punishment for the lamentation of “Bottled Regrets” where his sings a classic country melody dealing with loves lost over a bruised low-end groove, scalding guitars and tripped-out acoustics. The sound is vaguely Seattle in nature and has the seething undertones to match. “Elimination Round” broadcasts a looping, punk-riff cycle with enough southern gravitas to crack the Mason Dixon line in half. It has a roaming, folky drum march to complement its nervous energy with Porter embellishing his vocals in poetic prose that perfectly ride the rhythmic crests to the sky.

The album changes its dynamic midway through with the acoustic guitar intro of “Knocked out Cold” where sparkling, folksy/roots transitions give way to workingman’s rock n’ roll with enough guitar gusto on hand to knock out a herd of cattle. Speaking of cattle herds, “Don’t Call me Darlin’” is a rustler’s jam if there ever was one; the kind of song you’d expect to hear in a Dodge City saloon with hearty steel guitar, electric twang and acoustic riffage forming a marriage in absolute harmony where not a single element feels out of place. The trio of “Hey Kentucky,” “Long Story” and “Sounds like Goodbye” are such humid rockers you can practically feel the swelter of the desert creep across your skin as Porter’s vocals drip with malice and the guitar grooves rip n’ roar through sunstroke melodies, giving way to the nighttime placidity of “Sleepy Eyes” and its acoustic, breathily sung melodies that are by far the softest, sweetest moments on the entire record. Capping things off and ending the album on a six gun salute, “Trouble in Paradise” rages hard with grand stand riffs, combination vocals and a twitchy drum performance brimming with precise, carefully timed fills that nail every riff into place. This is a locked-on rock jam that sets itself from stun to kill in a heartbeat.

If you are looking for a rock album that does away with the B.S. and just simply ROCKS, Above the Sweet Tea Line is like that long lost pearl you’ve been searching for over the years. This is an old sound wrapped up with a fresh coat of paint and damn does it sound good. It’s no secret that Porter has studied all of the great rock and country legends, and honed his chops into those of a master craftsman. Real rock has been sorely missing in 2015 and there is no doubt that The Tucos are here to save the day!