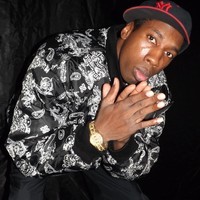 Jamel Hot Boy is never far from his right hand man Phoarah. In fact, I think those two should pair up and become a hip hop duo because their chemistry is undeniable in every song he’s featured on of Jamel’s. Songs like the repetitive “Gucci Bandanna Hangin” and the weird, slow and cocky at times “That Pretty Flock” Cocky, confidant — you be the judge. I’m ruling Jamel’s just a guy who knows his worth in the rap game and isn’t afraid to show it. That’s surely the case with “We Going To Make It” which features his number one go to guy Phoarah, as well as Cheif-ington and Kadeya for that R&B flare in between the tongue twisters when the verses kicked in. Of course you can’t have hip hop without the money, that cash money was represented in “U Wanna” featuring Phoarah (again). Jamel got clever with “Arms of Steel” saying he was like Visa; everywhere you want him to be. That was pretty funny and ear catching. If you are into acts like Wiz Khalifa and Tyga, check out Jamel Hot Boy and his rhymes. (https://soundcloud.com/jamelhotboy)