Fresco Fay And His Pure Skills 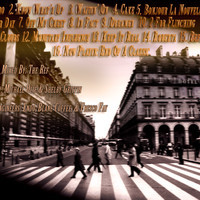 Fresco Fay is a pure talent that doesn’t have to be over the top to make it to the top. “Beat- I Knew” has downbeat that has this doomsday vibe to it. It’s like a club in “The Walking Dead” or something. “Before Peace” is a hip hop song that Fay put his touches on as the producer. The words come strong, but the music is soft and trickles in. “Keep It Real” sounds like a harder version of a neo-soul song with a hip hop mask on it. The music really helps this one take a step to the left when compared to the others from Fresco Fay. That same feel comes through strong in “Dreamer” as well and it’s here that you get a good grasp on what Fresco Fay is all about. Things never cross over into hood or street rap style, Fresco Fay keeps it real the entire time and never really tries too hard to be cool, it just it. If you’re into hip hop that doesn’t have to be overzealous and relies on talent, check out Fresco Fay. (https://soundcloud.com/fresco-fay)