DRE-B Brings It and Words It Nice 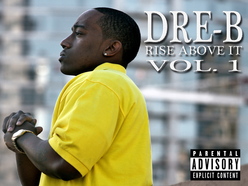 DRE-B is an MC who does it like he’s supposed to but shows that he can rise above too. “I Got It” is such a good song and that’s because it lives up to its title. The beat is a stunner and the lyrics have so much too them in the verses that it takes a few listens to catch everything. “Hard Livin” is quite the opposite when it comes to the overall package of the song. The whole demeanor is different, calm. The message in this song is a lot deeper than you hear in a lot of today’s hip hop. It’s got a philosophical feel to it. Then you get back to the regularly scheduled pace with “I Aint Trippin” featuring DG. DRE-B gets some help from DG again along with TJ THA TEXXXAN on “The World Is Mine” and it sits somewhere in between the other songs we’ve already hit upon so far as long as pace. As far as the whole song’s concerned, it’s definitely one of the strongest. DRE-B goes hard solo but can handle his own and bring it with others on board as well. If you’re into hip hop that’s traditional with what’s going on now, but can get deep — check out DRE-B. (https://www.reverbnation.com/DreB1)