Chris Sabatino – Maybe Not This Time 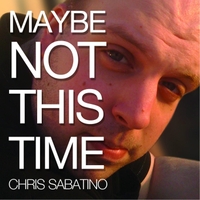 Chris Sabatino – Maybe Not This Time

From small town Ohio, Chris Sabatino sounds like a man on a mission on his debut EP, Maybe Not This Time. He certainly draws a lot of inspiration from old country artists as well as blue-collar rockers like Mellencamp and Petty. The tunes are held together with acoustic guitars, electric leads, standard time-keeping and Sabatino’s rough voice and down and out lyricism. Thank goodness he’s not coming from that modern line of country where rap and pop take over the grit of the songwriting.

The EP’s opener “Rockstar” is a biting expose about making it in the music industry with Sabatino rattling off hard truths while working his way up to a strong chorus. His little late game lead lick is spiced with soul, and his vocals have a particular snarl to them with good range for the hook melodies. He can go low and he can go, the versatility of his voice giving the song its character. “Garbage” is even darker with a funeral organ adding backing melodies over a tub-thumping beat and a hard plucked acoustic guitar. Sabatino’s voice is wrought with loss and frustration about being thrown aside by a friend or lover. He sure as heck isn’t singing a happy song and sells the darkness well with a certain emotional fervor lacking in modern country. He gets a roughshod growl going in the chorus, as subtle electric guitar backing eventually turns to a full-blown, scorching southern-fried lick.

“Escape” moves at a minimal, bluesy crawl with the drummer barely keeping time, the bass shucking deep heavy single notes and the guitar occasionally chiming in with a downward strum. Chris doesn’t allow any light to shine in, sealing the cracks of the song with airtight musicianship that has an almost flamenco flavor on the guitar whenever the acoustics kick in. Those hoping for an explosion of time-changes or shake-ups will be sorely disappointed that the song stays in this mode throughout, but in the end it proves effective for maintaining a dogged mood at all times. “Here with Me” follows the same template but allows more prominent guitar and vocal to cut through the dense, slow, bluesy fog. Again, Sabatino isn’t a happy man, but avoids teenage angst clichés and really comes across as a man truly down on his luck. Closer “You’re the Only One” fully features the electric and acoustic guitars with plenty of support from the organ. It’s a subtle yet upbeat with many layers and a chorus where Sabatino shines on the hook just enough to make it stick. This track is a welcome return from the soul-baring bleakness of the prior couplet and ends the record on exactly the note needed.

Maybe Not This Time is a challenging listen. If you stick with it, you’ll be rewarded with thoughtful songwriting and subdued, yet excellent, instrumentation. Sabatino doesn’t write tunes for the mainstream and broadcasts his music from an alley more often than a high rise apartment building. In the end, this EP feels real and Chris is definitely a talent you should keep an eye on.