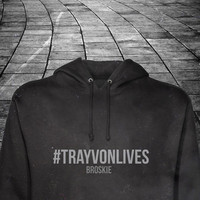 Broskie is a rapper from the Sunshine state that takes the reality and puts it to song, be it his own life or that of others. The events in Florida in 2012 that left Trayvon Martin dead affected many around the world, including Broskie. So he took it upon himself to write this ode to the young boy who not only lost his life, but whose killer was let go scott free in “#TrayvonLives.” It’s actually a really great song with a powerful message about forgiveness and it sounds superb as well. It’s probably because the rapper also calls Florida home as well, that he was even more touched by Martin’s death. With “HighPILOT” Broskie turns it up just a little but still handles his business in a cool and calm demeanor. It’s definitely more street than the other, and likely more of what we can expect from Broskie. If you want to hear homage to a young man or just want to get a little hype, Broskie has you covered on both counts so check him out now. (https://www.jango.com/music/Broskie?l=0)