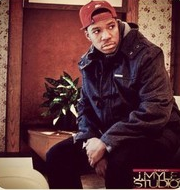 Out in Chicago there is Jon De Pledge, a man who can do it on his own but likes his pals around. “Wine & Spirits” has him side by side with Cii La Cole & IV. He doesn’t do much in this track but keep it going with his random occurrences saying the title. It’s mostly the females doing the work. While that song sat more in the R&B realm, this one hops on the hip hop track while maintaining a laid back vibe. It’s served very chill. Pledge stands center stage with “The Fame.” It’s good to have your friends on board but this song is proof that it’s also good to step out on your own as well and shine. Then he’s back with his boy with Add-2 on “No Sense.” This one really sticks out but I definitely leaned more towards “The Fame” in the end. It’s always nice to hear what someone can do on their own. If you’re into young emcees who flow like a pro, check out Jon De Pledge today. (https://soundcloud.com/jdpjski)