On the Run with TDLK 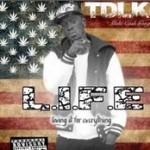 Multi CashGang manages to sound mainstream while keeping it street alongside TDLK. “For You” starts with what sounds like it’s going to be a mainstream track that falls into the company of Akon, but it then gets a little more swag to it. TDLK hops on “Molly Run” and here we get a track that would be great for a house party. You get that chorus that everyone learns in an instint. TDLK is back for “New Shit” and here he brings slow jams to the forefront of hip hop. Not apparent from the start, but as the song rolls on, you hear his social commentary shine through strong. It’s always nice to hear a song that has a real message within the beats and rhymes. If you’re a fan of hip hop that’s making its way to the top by being well prepared and structured, check out Multi CashGang and TDLK now. (https://soundcloud.com/multicashgang)