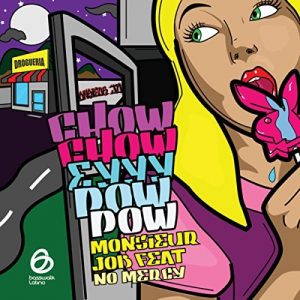 The truest beauty of Monsieur Jobs’ first single “Chow Chow eyyy Pow Pow” is the naturalness with which the single unfolds and how ingratiating the song is from the first. It has a more than manageable length in its radio edit version, coming in at just three and a half minutes, but the band does admirable work bringing a variety of musical strands together within those limits and invokes a world of musical color. The song is written by two of the band members, Toby Holguin and Stan Kolev, and their collision of Columbian and European influences steers much of the band’s hybrid sound. They bring together distinctly Latin touches with an edgy EDM vibe that remains understated in the radio edit while there are a number of instrumental touches that further deepen the songwriting power. The project, originally conceived by Basswalk Latino executive Jose Fernando Holguin, bears all the marks of a creative unit capable of lasting for years to come.

You can hear that in the way songwriters Holguin and Kolev thread various instruments through the mix without ever allowing one particular sound to dominate the mix. The song’s rhythm section has an outsized presence in the song compared to a lot of tracks of this ilk, but the drumming leads the way for the composition more so than the bass and has an appealing organic sound that contrasts well There’s some additional instruments that come into the mix along the way, but Monsieur Job never allows any of these extra elements overwhelm listeners or complicate the performance. Instead, they make for a more varied listening experience and show off the latent virtuosity they can bring to bear for making a more accessible tune. It isn’t a quality we find in abundant supply in the pop music scene today, mainstream or otherwise.

Another sign of the great creativity driving the song and performance comes through Martin Citron’s singing. Citron’s enjoyed a long career so far and has lost nothing off his voice; he brings a veteran’s assurance to the vocal that we can hear in its phrasing, timber, and the way he plays to the music rather than posing his voice against it helps make it even more successful. He does an excellent job inhabiting the lyric and delivers its Spanish language with such aplomb you’ll understand everything he’s trying to say even if you only speak English. There’s a steady balance between the music and words that never fails and is a final quality emblematic of the coherence and unity bringing this song together. Monsieur Jobs’ recording “Chow Chow eyyy Pow Pow” has spice and punch in equal measure and stands as one of the most lively debut singles you’ll hear from the modern pop world. The track has an immensely human edge to go along with its playfulness and musical depth.