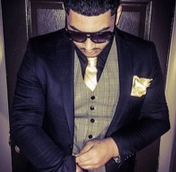 K.I.D does it up with a handful of tracks. “Tony” went somewhere I didn’t think it would. Fresh pressed in the photo on his site, I thought K.I.D may come through with some R&B. Instead this emcee came hard. He keeps bringing it as “Not Regular” says what no man wants to hear, but rest assure they’ll be singing along. They’ll also be singing and agreeing to “Wanna Die Rich” because who doesn’t? Lastly, we get a little reggae with the start of “Energy” but then smooth it out as it comes through similar to what came before while “Hookah” closes up shop with a fantastic, captivating intro. If you’re a fan of hip hop that sounds like it’s somewhere between the streets and the radio, check out K.I.D now. (https://soundcloud.com/user34470188)