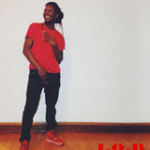 Frankie Pyro is all about the balancing act. “Nietzsche (Interlude)” is where we begin and it’s this monologue of sorts that’s short and to the point, not delivered by the artist at hand. Then we get into “Sour Patches.” This one has a Common feel to it. The lyrics and beat have a mission, one that’s more about informing than entertaining. In “Phoenix” things take an aggressive turn. It’s not a harsh beat, but rather the lyrical delivery. You can hear the anger in every line. We head back to the laid back ways with “European Poverty” while “Thoughts at 5am” sounds like such. When it’s that early, or late depending on how you look at it, thoughts are random and come out in a bit of a ramble. That’s what this song sounds like, so it’s perfectly titled. If you’re a fan of Common but also have a love for the harder stuff, check out Frankie Pyro now. (https://soundcloud.com/frankie-pyro)