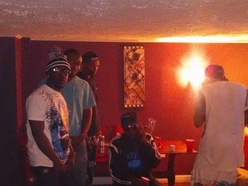 Coming together, the men of Boyz N DA Massis do it up. We open it up with “Booty Flexin'” and it’s one of those songs that would get the party turnt up. It has this chilled beat but at the same time it makes you want to shake it. We hear more of a cohesive group in “Spazz Out.” Here numerous vocals come through and take things to a new level. With “All Bussinezz” you can hear a southern influence. It’s like something that would’ve come out of Juvenile’s camp back in the day. “That All I Know” takes some time to get to business but when it does, it gets things done well. Getting deep, Boyz N DA Massis ask “What’s Life” and bring us some wise answers. If you’re a fan of rap groups that roll big, and have a Southern twist to their sound -check out Boyz N DA Massis now! (https://www.reverbnation.com/BOYZNDAMASSIS)