Blac Seed Raps for the Heavens 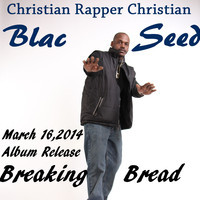 Blac Seed is a Christian rapper from Texas who believes in his Lord and word. In Track 5 Blac Seed lets the man upstairs he’s talking to him, with his friends Tat the Ambassador by his side. This Christian rapper also takes on the hits of others. He’s remixed the best from Drake, “Worst Behavior” as well as another from Drake, a hit featuring Big Sean and 2 Chainz. It’s when he sticks to his own thing that he shines though, like with “Zero and Tray.” He says it all with this one track – the difference between him and other rappers is “that he’s a happy one.” That speaks volumes about what Blac Seed’s all about, so if you’re into positive rap, check him out. (https://soundcloud.com/blac-seed)