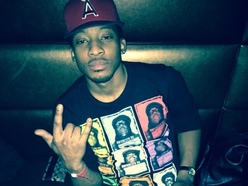 Out on the east coast in Virginia is an emcee by the name of Baybay. His name sounds young, but his sound is anything but. “Lifestyle Remix” sounds like it’d be something Lil Bow Wow would come up with back in the day when it starts off, but then it gets mature fast due to the language. It turns into something you’d find on a mix with Tyga. In “The New Me” it’s less of a mainstream sounding track than the last, but does have a sense of street smarts to it. Things take a hype turn as we enter “ROTLK.” What I like about this one that I’m sure listeners will too, the sick beat. That can be said of “Dead Weight” as well, but this one also has a great set of lyrics to go along with it. Last up, “Blunt Muzik” slows things down and brings a sense of old school to the table to end our time with Baybay. If you’re a fan of Tyga and Trey Songz, check out Baybay’s music – out now. (https://www.reverbnation.com/baybayakafreakyty)