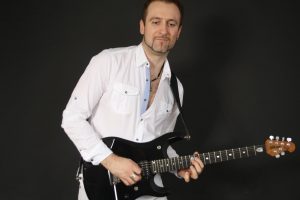 Fretwalk takes listeners to some amazing places. Vladimir Maisiuk, a Belarus native currently residing in UAB, has traveled the world with his array of guitars, electric and acoustic, offering his signature style to both live performances and studio work. It’s a combination of highly melodic lead work coupled with a tasteful approach to selecting notes and strong rhythm guitar work interspersed throughout. There’s eleven songs on Fretwalk and their stylistic reach extends across many genres and touches on different themes with a sureness of purpose few guitarists, at any level of visibility, can hope to match. The supporting musicians ably help Maisiuk make these songs even more intense sonic experiences thanks to the restrained accompaniment they provide that’s still brimming with much artistry. The album embodies all of the same qualities distinguishing his latest single “Summer Thrills” – sparkling and intimate production, cleanly played lines, strong melodic and songwriting values. Some albums are unheralded gems, but all it takes is a willingness to dust them off so that you can behold their luster.

“Valley of Dreams” is an ideal first song, but it also of a different stripe than many of the later songs. Some might say that Fretwalk is meant to highlight Maisiuk’s guitar playing, and the opener certainly does in an unusual framework, but it isn’t a crime in this case. There’s a command of fundamentals apparent throughout the course of Fretwalk that shows itself off in a number of ways. “Pilgrim” is much more traditional, less amorphous, and has an air of the epic that recurs throughout the duration of the release. Maisiuk makes a habit of marrying strong acoustic and electric guitar tracks in many of the album’s songs and one of the best unions of this sort comes with this song. As suggested by the title, there’s a subtle hint of the spiritual, outward and inward journeys, strewn throughout the song. “Desert Morning” has an exotic spin missing from many of the other tracks and it’s the second real departure from the traditional on this album. The middle of Fretwalk finds Maisiuk working at the absolute peak of his powers. The song “Mountains” completely embodies its title as he takes his guitar playing through a number of memorable highs and lows within a relatively small frame and invokes wide, impressive landscapes beyond measure. His ability to conjure images so effortlessly is one of the most fascinating sides of his talent and it never fails him.

The album’s longest track, “Honest Words”, is likely the best example found on Frewalk of his talent for writing and playing high class guitar instrumentals with a commercial edge. You never miss vocals on this album because his guitar playing sings so convincingly and makes you forget about any lack of a singer. “Memories” doesn’t have the same strong commercial qualities as the aforementioned track, but it has a brighter tempo and the wisdom and depth radiating from it is quite powerful. He offers up a final stylistic surprise with a turn into the blues on “Long Day”. It’s the last full length song on Fretwalk and draws from a deep well of emotion to hit its mark. Vladimir Maisiuk’s first album Fretwalk is one of the finest instrumental albums, any genre, to emerge in recent years and serves notice of a major new talent arriving on a global scene.