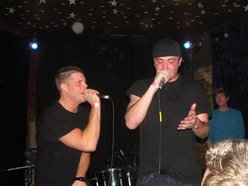 Shneal is a hip hop artist who is all about the revolution. Tellingbeatz helped out behind the scenes of “Howl” and was smart to incorporate the natural sounds of wolves on the track. When Shneal kicks in after the moon loving creatures it follows this slowed down beat that’s as serene as a night sky. That same idea translates over to “Don’t You Forget” as well. Drama AKA Treason hops on “Dangerous,” which starts out with a monologue by neither of the emcees. Then it busts into a track that steps it up a bit from the last two as far as the pace goes. It’s clear that Shneal has a real message behind his music as that isn’t the only track that starts with words with a higher meaning and intellect. You can find that on “Bird’s Eye View” as well. Drama AKA Treason is back for “Freedom” and they go after the man in this one. If you like hip hop that really has something to say, then you have to check out Shneal today. (https://www.reverbnation.com/shneal)