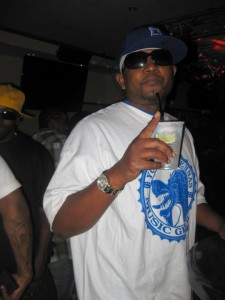 Out in Pomona is a grand space for fairgrounds, an amazing venue called the Glasshouse and a rapper you need to know who goes by the name Bigg Tiny. “Fuc Da Patron” featuring Gawpdondollasign is where we begin and it’s a great place to do so. It has a sick beat that’s meant for the club but the lyrics are delivered with a sense of street. Speaking of the club, “Stepped In The Club” comes through and as the title laments – it’s meant for a night out with the guys. It’s also got a simplistic approach to the verses makes it one to get down to when in the whip too. As we roll on, “Goin Ham” sticks with the same mentality but gives us more a hard dance beat. You could definitely see the girls moving their backside to that one. Quarter Bill comes in and helps out with “Lighters” giving this one a more mainstream hip hop feel with the intro, but it gets a little gangster rap with some of the verses that come through . All in all though, if you’re into hip hop that’s for the nightlife, then Bigg Tiny is the guy you better get to know. He creates music that is fit for a great night out – so check out Bigg Tiny today so you can prep for tonight. (https://soundcloud.com/bigg-tiny)