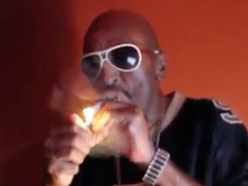 UncImo isn’t your typical rapper and he doesn’t fit the average age, but his music is on par with the young cats in the game right now. “Bad Knee” proves that age is never an issue when it comes to being a badass in the rap game. Even when you’re 60 and your parts aren’t working as well, you can still produce music that stands tall. UncImo has the type of voice that you don’t ignore. His range is on the low side and it invites you in and demands attention on songs like “Deep In The Game.” Then you have songs like “Bust It Up” featuring Suave Bob that remind you what Lil Wayne and Co. might sound like in fifteen or twenty years; still over the top and bringing it. The energy in this track is untouchable. If you ever thought you were too old to do what you love, you’re living life wrong. You could stand to learn a lesson from UncImo. You wouldn’t know his age if you heard a piece of his music, so you can’t rule him out for that. If you’re a fan of true hip hip, do yourself a favor and check UncImo out. (http://www.reverbnation.com/uncimo)