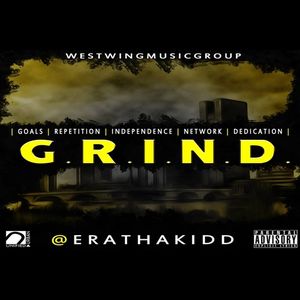 Era Tha Kidd’s “G.R.I.N.D” is his latest and it’s making some waves in the hip hop scene. The intro goes for longer than expected, but it sets the tone for the rest of the record. We then head into “Nothing Was The Same” and it’s a little slow at first with a skit but then Era Tha Kidd comes in and he tells his tale in a chilled manner. We keep that laid back demeanor going strong with “Like Me.” In which it sounds a little like if Akon went into actual rap and not mainstream hip-pop. We then head into something that has more bite with “I’m On It.” If you’re a fan of hip hop that’s on the same level as the likes of Tyga and Wiz Khalifa, check out Era Tha Kidd’s “G.R.I.N.D,” out now. (http://www.datpiff.com/Era-Tha-Kidd-GRIND-mixtape.598244.html)