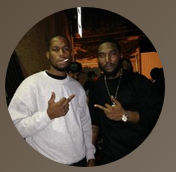 El Cannon’s “New Freedom” is a masterful hip hop record worth your time. The record starts with “Lord Knows” and there’s a slow build up to it but once it starts, it’s great. It’s a very easygoing tone of voice. He’s got compassion intertwined with a realness. Come “Real Niggas” it’s clear that El Cannon doesn’t play around. He’s about keeping it straight with his rhymes. When it comes to “Outkast,” he has a winner on his hands. You don’t really hear a lot of songs like this in hip hop. It’s more a subject matter for pop punk and rock, but this idea of the outsider – it’s beautifully done here. It’s pretty chill when it comes to this record but we get a little pep in the step as we get into “Ridin Low.” What I appreciate about this record is that it sounds well done. Things are crisp and clear and you don’t ever feel like you’re listening to an underground artist. El Cannon has his bases loaded and this one is hitting it out of the park. Check out “New Freedom,” out now.